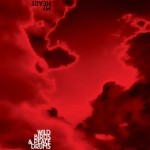 This track was sitting high in my list of favourite songs of 2010 (to be written up over the next month), until I realised that it was actually released late last year. I’d first heard the original Wildbirds & Peacedrums song as the soundtrack to a video at Oxford’s Modern Art Museum, in which a group of dancers formed a spontaneous dance routine in a warehouse and innercity areas. Unusually for me, I’d enjoyed the installation video so much I watched it all the way through twice.

It was only a few months ago that I heard ‘My Heart’ again, and it took me a while to place it. The original track is measured, bluesy and raw – although on further listening it seemed to take rather more time to cut to the chase than I’d remembered, and the second half seemed to lose itself a little. Enter Deerhoof’s remix, which leaves the vocal relatively untreated, emphasises guitar lines, but removes the coda and, in a pretty audacious move, actually removes whole bars in order to keep the vocal flowing with few instrumental gaps. This results in a far more poppy tune, despite the loping, woozy effect of the flexible time signatures. It’s by far the most accessible remix I’ve heard from Deerhoof, and turns a solid tune into something oddly hypnotic.

Listen to My Heart – Deerhoof remix on Soundcloud.