SNAKESKINS, my novel about a group of people who produce spontaneous clones, was published by Titan Books on 7th May. That seems a long time ago now! Today marks the end of an intense and intensely fascinating period – a fortnight-long marketing blitz which involved huge numbers of book bloggers and Instagrammers posting information, snippets, Q&As, giveaways and responses to the book. It’s been unlike anything I’ve experienced in the past. As I noted in my previous blog post, it took me a while (that is, all of launch day, which I frittered refreshing webpages obsessively) to understand that this process didn’t directly involve me – though of course I’d generated interview responses and blog posts etc before the event. 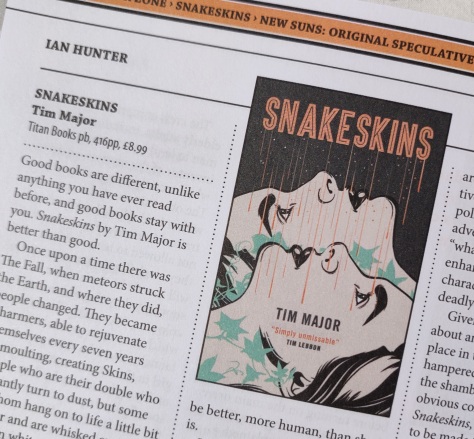 As I’d hoped, week two has been markedly more casual and enjoyable. As well as my easing up on the F5 key, this was also the week in which a greater number of reviews began to filter through – culminating with the new issue of Interzone popping through my letterbox yesterday. The Interzone review is very positive and I’ve been buzzing ever since I read it. The fact that the reviewer is so enthusiastic about the novel is incredible (‘unflinching characterisation and at times deadly prose’ … ‘he’s set the bar high if he’s going to top this’), but just as incredible is the fact that Interzone contains a full-page review of my novel at all. When I first started writing fiction in 2013, my stated ambition was to receive a rejection slip from Interzone. Seriously, a rejection slip, rather than publication, because it would signal that I was giving this writing thing a real shot. I was delighted with that rejection slip. Then the next year my first story was accepted for Interzone – my first big sale, and the moment when I felt like I might have something to offer as a writer. To have graduated to a full-page review of my new novel feels equally as significant a milestone.

So, that was a big moment. What else? I was tipped off that a full-page ad for the book appeared on the back cover of Locus magazine (the US genre trade mag), which is pretty ace (thank you, Titan!). But while I wait for more reactions from readers and reviewers, the main activity has been updates on various book blogs. On top of the interviews and guest posts I mentioned last week, these pieces were published this week:

Oh, and I recorded my first radio interview! If you’re in the Manchester area you can listen to me talk at length to Hannah Kate on her show, Hannah’s Bookshelf (Saturday 18th May, 2–4pm). After the broadcast I’ll share links to listen online. I thoroughly enjoyed the conversation, but I’ll be wincing in embarrassment when I listen to the show, no doubt.

And there have been more reviews. Here are just a few:

“Snakeskins has so much more in it than you might first imagine. It’s packed full of slowly revealed alternate history, it has mystery that unfolds at a great pace, and characters who aren’t superheroes but real people with believable motivations and personal stories. I read Snakeskins in one day because I couldn’t put it down, but the story, the world, and those who inhabit it will stay with me much, much longer.” Set the Tape

“Snakeskins is an excellently crafted and often horrifying look at identity and what it means to be human. … A keen look at human nature and the workings of a corrupt government” Pythia Reads

“I really went into this one not knowing what to expect, and ended up devouring it in two days! It’s fast-paced, the characters are well developed, it’s weird, and it’s totally British … I think folks who are into things like The X-Files or Orphan Black would love this!” Grimdark Dad

“This is an intriguing SciFi conspiracy novel which, as with all good SciFi, uses high concept ideas to explore prescient issues about our society’s treatment of people, and it’s bloody good too.” The Hebridean Reader

There are a lot more reviews besides those – I’m doing my best to collect them all on the dedicated SNAKESKINS page.

On top of this, I’ve been keeping an eye (okay, checking twice a day) on the Goodreads page for the book. It’s looking okay, I think! As of today there are 20 ratings, with a mean average of exactly 4 stars. If you do read the novel, I’d be grateful if you could post an honest review on Goodreads and, even better, Amazon. I’m told that amazing things happen if you get to 50 reviews, and I daren’t even imagine what that might be.

So, in short, all still going well. I suspect I’ll feel slightly adrift next week, without the tangible evidence of book blog updates. I’ve have to keep reminding myself that I have proof that people are reading the book right now, because that’s what this is all about, isn’t it? 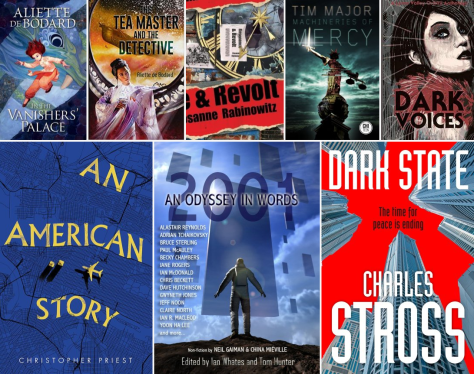 Though I haven’t written any fiction yet in 2019, the year has got off to a good start in terms of votes of confidence in my earlier work…

I was pleased and surprised to find that my story ‘Throw Caution’ has been longlisted for the BSFA Awards. It was first published in Interzone #276 edited by Andy Cox. It’s a terrific list of nominees, with lots of writers who I now consider friends – I’m very proud to be listed alongside them.

Dev Agarwal at BSFA Vector included my books in his Best of 2018 article: “Tim Major, (who along with Shona Kinsella co-edits the British Fantasy Association’s Horizons magazine) published a young adult SF novel called Machineries of Mercy (ChiZine) and a non-fiction book that appeals to genre consumers, about the seminal 1915 silent film, Les Vampires (Electric Dreamhouse Press). In both works, and in his co-editing of Horizons, Major brings a clear and vivid sense of location and character to bear that makes his narratives — fictional and biographic — come vividly alive to the reader.”

On his Scattershot Writing blog, James Everington included ‘The House Lights Dim’ (from Dark Lane Anthology #2, Dark Lane Books) in his list of his favourite short stories read in 2018.

Finally, and now looking forward to 2019, I recently learned that my story ‘Concerning the Deprivation of Sleep’ has been picked up by editor C.M. Muller for Synth: An Anthology of Dark SF. There’s a list of my upcoming short story publications here, which includes a story in one of Muller’s other projects, Twice-Told: A Collection of Doubles, due out in February.

This year I wrote about 135,000 new words – more than any other previous year (I usually average around 125k, and in 2017 this fell to fewer than 80k as much of my free time was taken up with moving house, twice). I wrote:

This year, I spent 254 hours either writing or editing. I’m not sure if that sounds a lot, but on average it works out as 21 hours per month doing what I love doing – not quite 5 hours per week. When you put it like that, it doesn’t seem like much at all. In 2019 I’m determined that I’ll find the time to write for at least 10 hours per week.

When I wrote my summary of my writing year 2017, I noted that it had been a year of paving the way for an interesting 2018, and I suppose that panned out as I’d hoped. This year I had the following published:

But, once again, this year has mainly felt like prep for a more exciting next year. Because the biggest news for me this year was the double-whammy of signing with Alexander Cochran at C+W literary agency, and securing a two-book deal with Titan Books. Snakeskins will be published by Titan in May 2019, a milestone around which much of my year will be arranged. (And Hope Island will follow in May 2020. Knowing that my novel-in-progress already has a home has changed my attitude to the writing process, though it’s hard to say whether the net result is that it’s more or less pressurised.)

Secondly, my first short story collection, And the House Lights Dim, will be published in July 2019 by Luna Press. Alongside 13 stories that have previously appeared elsewhere (including a novelette that was originally published as a standalone title, Carus & Mitch), there will be three new stories:

Other stories not written this year but to be published for the first time in 2019 include:

In addition, behind the scenes I’ve been lining up various events and projects. Next year is going to be busy. More on all that in the New Year.

Perhaps most importantly of all, I’m genuinely closing in on the one-million-new-words mark:

I wrote about 124,000 (new) words in 2014. That’s less than last year, but that figure doesn’t reflect the huge amount of time editing and reworking ‘The House-sitter’. Also, I’ve often been exhausted due to my son’s sleep patterns, so this is still a higher word count than I’d anticipated.

To date, my fiction word count total is now something in the region of 448,000 words. I’d hope to reach the half-million mark at some point in early 2015.

The Interzone team have revealed the illustration for my story, ‘Finding Waltzer-Three’, which appears in issue 255. It’s by Wayne Haag, the same artist who created the terrific cover. 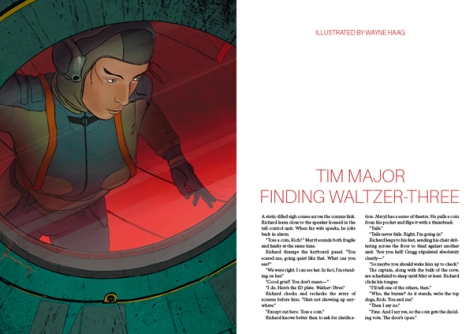 I love it. It’s the first time that any of my stories has been illustrated. I couldn’t be prouder.

17 Nov 2014 update: And Interzone #255 is available in print now! Click here and scroll all the way to the bottom.

I received some good news a couple of days ago…
My ghostly SF story, ‘Finding Waltzer-Three’, has been accepted by Interzone and will be included in the November issue. That’s a bit of an ambition fulfilled, right there! 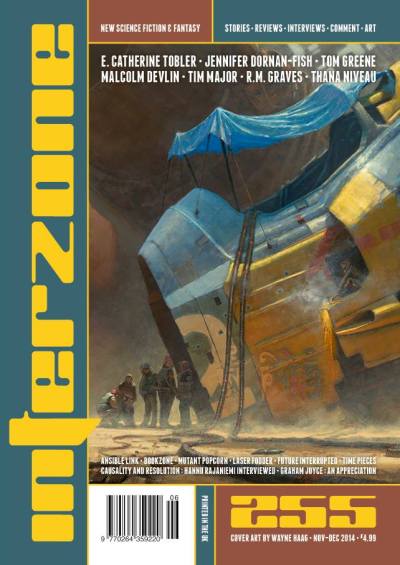