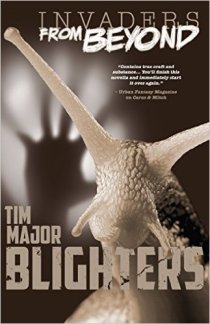 Them Blighters are everywhere.
They fell out of the sky last year, great horrible armour-plated slugs with razor-sharp fangs. But ugly as they are, they give the ultimate high to anyone nearby: a blissful, gleeful contentment that people are willing to kill for.
Not Becky Stone, though. All she wants is to drink beer, listen to her dad’s old vinyl, and get her life back to how it was before everything was all messed up.
Blighters? Frankly, she could do without them.

Standalone ebook: Amazon.com / Amazon.co.uk
INVADERS FROM BEYOND print omnibus including BLIGHTERS and novellas by Julian Benson and Colin Sinclair: Amazon.co.uk

“Blighters is an effortlessly readable book sprinkled with subtlety and insight, humour and honesty, and was a very pleasant surprise. It is everything that I was not expecting a book about giant space-slugs to be, and is so much better for it. Gorehounds and schlockfiends steer clear – this is strongly recommended for fans of original and uniquely weird fiction.” Ginger Nuts of Horror

“This was a fun, meaty novella that was a creature feature, but SO much more. Highly recommended-especially to fans of the old Sci-Fi/Fantasy stories and magazines!” Horror After Dark

“stand-out story, Blighters … which feels like Starship Troopers meets Body Snatchers for the Snapchat generation … with its fast-paced narrative building to a beautiful reveal.” Starburst